Beauty in the Broken by Charmaine Pauls Book Review 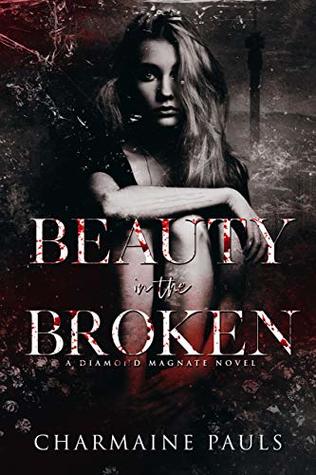 Yet again I’ve been sucked into another contemporary erotic story by Charmaine Pauls set in the criminal underworld of South Africa since I enjoy her writing style and continue to suck up the cultural context of her plots like a vampiric tourist (Would I go to South Africa if the opportunity arose? Yes, if I had someone in the group who knew how to keep me out of more dicey situations — I am an upper middle class white woman whose extreme privilege renders me incapable of reading some situations correctly since I have no context. Do I actually want to experience the world of the powerful criminal elite in South Africa, which features in many of Ms Pauls’ books?  Definitely not — I’ll enjoy that safely from my Kindle half a world away.).  I enjoy romance and erotica with a darker twist, so the caution about torture, punishment, and power play merely whetted my interest.  However, if you find any of the above triggering or generally dislike romantic stories featuring dubiously good heroes or manipulated consent Beauty in the Broken will not be your cup of tea.  I found it beautifully intense and complex, but it is definitely more like a spicy curry (some people love it; some can’t stomach it) than a warm mug of cocoa.

Six years ago Damian Hart was arrested for a theft he didn’t commit, so diamond magnate Harold Dalton could claim the new mining information the young man intended to use to raise himself from poverty.  In a Count of Monte Cristo-like plot Hart emerges from his jail sentence with one thing in mind: revenge.  However, Damian doesn’t just want to make Dalton suffer; he wants to humiliate the older man in every way possible including marrying Dalton’s widowed daughter, Angelina.  The beautiful Angelina captured Damain’s imagination at their meeting six years prior, and even her diagnosis of insanity won’t keep him from claiming her (and her immense fortune) as part of his carefully laid plans.

I know that many readers will be taken aback by the idea that Angelina struggles with mental illness (I know I did at first) because she legally does not have any agency (she cannot have a job, handle her own money, or make any choices for herself), so any portrayal of Damian giving Angelina a choice is only an illusion.  However, Ms. Pauls carefully treads a line of her hero being harsh and controlling and trying to allow his partner some autonomy (it’s still very dub-con, but at least Damian doesn’t insist on full marital rights immediately after the wedding).  Angelina also understands her complicated situation as a ward/possession and refuses to be entirely passive about her circumstances.  I know that dubious consent/non-consent is a hard line for many readers though, so I recommend skipping this novel if this set up would hinder your enjoyment or sense of safety.

In many of Charmaine Pauls’ previous books the heroine was crime adjacent but managed to be innocent/untouched by the darkness of that world.  As a result I found the romances with the criminal heroes somewhat disturbing since they smacked a bit of old school breaking in of unsullied virgins or rich debutantes slumming it with boys from the other side of the tracks.  Angelina is not an innocent, and she holds secrets that change the entire dynamic between her and Damian.  He learns the the truth of his wife’s past along with the reader, and it made a huge difference to how I saw the development of their relationship.  Damian also learns how to temper his need for absolute control with desire for someone else’s well-being, and he chooses to be less of a monster for at least one woman.

Overall, I found Beauty in the Broken to be the most enjoyable Charmaine Pauls’ novel I have read so far.  The protagonists complemented each other well with their emotional baggage, and I believed in their growth by the end of the story.  Both of them were flawed, damaged people, but they worked together in a way that convinced me they would successfully navigate life fully.  My only question is are there any other tormented young men in the South African diamond industry that we can get stories about

30 something year old animal rescuer, aspiring writer, and all around geek
View all posts by jlscaife →
This entry was posted in reviews and tagged erotica, novel, revenge, South Africa. Bookmark the permalink.