Defy by Sara B. Larson Review 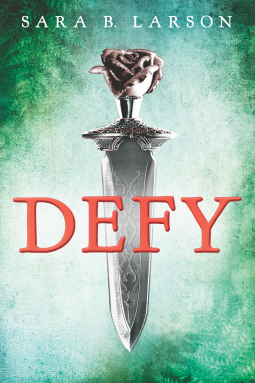 Reviewing a debut novel is delicate business because I neither want to falsely heap praise on a story that didn’t match my expectations nor discourage a fledgling author from writing. However, I do feel that I should be honest about what worked and didn’t work for me in a given story in hopes that the writer can take it in stride and improve later works. Defy is especially difficult for me to review because it is not only a debut novel; it falls into the dreaded middle ground of reading material where I didn’t have a really strong reaction either way.

The premise for Defy sounded excellent: After the death of her parents at the hands of a fire wielding sorcerer Alexa Horren disguises herself as a boy to avoid being forced into the king’s horrific “breeding houses,” facilities designed to forcibly increase the pool of soldiers for the ongoing war with neighboring Blevon. She and her twin brother, Marcel, successfully make a name for themselves with their swordsmanship and gain positions in Prince Damian’s personal guard. The seventeen year old must hide her true gender, protect a prince she cannot respect, and keep herself in top fighting shape. When a sorcerer successfully kidnaps Alexa, her prince, and one of her fellow guards she learns that everything she’d heard about magic and Blevon is not as it seems. She must make a choice about where she stands on the issue of magic and which kingdom she supports.

That summary sounds pretty awesome, right? Unfortunately, that’s not really the plot of Defy. Yes, Alex/Alexa is hiding herself as a boy to avoid being forced into state sanctioned rape centers, and she and her twin brother are expert swordsmen in the prince’s guard. There is some political intrigue thrown in as well, but everything is a backdrop for Alexa and her raging teenage hormones ogling Prince Damian and her friend, Rylan.

I knew there was allegedly a love triangle in the novel, so I wasn’t surprised that romance was in the plot; I was just shocked and horrified at how the trite, juvenile love story dominated everything else. Even Rylan’s initial description has Alexa, the first person narrator, wandering off in an unnecessary description of his amazing chocolatey brown eyes. Prince Damian is the third side in the lopsided “triangle,” and Alexa’s recognition of his physical beauty also occurs at inappropriate times (while he’s having a nightmare, and she’s rushed in because she believes he’s being attacked? Ick!). It also becomes obvious very early on that Rylan is merely there to be another option for Alexa. She has no true interest in him other than friendship even after he suddenly reveals his feelings. Damian, despite his constant deception and impossible rank, rocks Alexa’s hormone fueled little world, and she longs for a time when they can just be sappily in love. The only saving grace to the love story is the end of the novel. Alexa’s choice surprised and impressed me given the tone of the preceding pages. It was the most adult thing I’d seen from her in the entire work, and it almost made sitting through three hundred pages of teenage angst worthwhile…almost.

Because the love story took up so much of the plot it’s no surprise that the world building and the villains were incredibly two dimensional. I never got a strong read on what Alexa’s world really was like. Antion is mostly jungle, and it’s humid. Blevon is more temperate and colder. There is no sense of a real culture or customs or actual society, and there is very little explanation about sorcery or magic in the world. Some people just are born sorcerers; the ability can be honed through training, but it’s otherwise just chalked up to genetics. The world wasn’t developed enough for me to completely buy into it being innately magical although it didn’t prevent me from enjoying the slight descriptions of some sorcerers’ skills.

Both Iker and King Hector, the villains of the story, became almost cartoony with each new crime dumped at their feet. I wanted to roll my eyes by the end of the novel as Hector was practically accused of kicking puppies and stealing candy from babies while Iker watched, applauding. They served their purpose as something for the protagonists to overcome, but they weren’t real people; they were plot devices. In my opinion, good villains need to have sympathetic sides as well unless you’re writing a parody or a super hero comic. Straight up evil individuals with no redeeming qualities just don’t feel real enough to be valid threats in most stories.

The villains particularly pale in comparison with Alexa, the hero, who, when you get past all her hormones, is a more fully realized character. She may be talented with a sword, but she’s scared of snakes and the dark and has a blistering temper. She grieves over the loss of her family and struggles with concealing her true gender from the men around her. She creates friendships with the various members of the guard, and she values her duty over all else. Much as some of Alexa’s behaviour irritated me throughout the book, there is no denying she is a whole person with strengths and weaknesses, which makes her far more interesting than a blank character.

For all of my criticisms of Deny I didn’t hate the book. Even as my critical brain fussed about the romantic angle my heart warmed with the overwrought scenes. It’s not a great novel, but it is mostly fun. It was an easy read that brought me an escape from my every day life for a while.

I just hope that Sara B. Larson’s next book feels more fully developed and not like a detailed synopsis of one.

3 Bloodroot Infusions out of 5

30 something year old animal rescuer, aspiring writer, and all around geek
View all posts by jlscaife →
This entry was posted in reviews and tagged fantasy, new author, YA literature. Bookmark the permalink.